Day of the Bats

On Thursday I got to work and found a rather inactive winged rodent hanging out on the ledge overlooking the first floor of the mall. Closer inspection revealed the beast to be worse off than I first thought. It was, to paraphrase Monty Python, "an ex-bat." 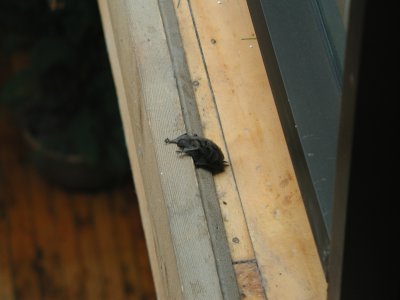 Later on I ran into one of the maintenance guys and he retrieved our furry little departed pal with some kind of pool skimmer device. I figured the rest of day was going to be bat-free but the way my summer has gone, I should have known better. A couple hours after that I was hanging out at my counter pondering how many limited edition Coffee Kit-Kat bars I was going to buy that night, when suddenly I spied a furry brown thing go whizzing by along the floor.

But this mouse had wings and it was flapping merrily through the music room aisles about two inches off the floor. Yep, another bat, this one very much alive. I watched it do a couple lazy figure eights around the CD bins before taking a right at the door and heading back into the mall proper. A minute later I was still scratching my noggin, pondering whether or not to call the maintenance guy again, when I saw him run by in the direction the bat had gone. He was doing that crouch-run you see military commandos doing in the movies, except instead of a gun he had a walkie talkie in his hand saying things like, "Crackerjack this is Dumpster Diver. I've got an eyeball on the critter, quadrant seven. Over!"

Lucky for us it was a slow day. The last thing I need is a gaggle of terrified soccer moms spotting a bat, leaping up on the counter and screaming their lungs out.